I adopted my lovely boy, Napoleon almost 2 years ago. He is a beautiful golden lab, now a senior at 8 years old. He loves pretty much everything, including the vacuum cleaner and the sound of motorcycles. When we brought this furbaby into our life, I never realized how much he would mean to me. He really is my ‘furbaby’. Now, as a trainer, I understand what proper leadership is, and how to behave around my dog. I also know how to discipline and reward. I recently stopped using positive dog training, and focus more on working on teaching the mind. Everything I learn, I practice on my happy go lucky dog first. I actually think he likes it.

He was about 75% obedience trained, and listened to my husband way better than me. Which is understandable. Dogs respond better to a male voice than to a female voice. So, I worked on verbal commands with him. He’s about 80% reliable with distractions. I needed more. So, we focused on hand signals. He’s about 90% reliable with distractions, and I think that’s as good as I will get him. Especially with how much time I have to devote to him. Which isn’t enough – it’s not as much as I want, and I wish I had more. However, having a full-time day job, and then running my own business on top of that is stressful and time consuming. I’m hoping there is an end. *sigh*… there has to be.

Now, leash training. Great with my husband, not at all with me. So, we work on this… and work some more. And he has shown massive improvement over the last two years. We introduced the Halti. He doesn’t like it, but he knows we aren’t going on a walk without one. He used to pull on the leash to get to children and cats. This has pretty much completely gone away. He learned that when he’s on a leash, he’s working. Yes, he still wags his tail and gets really excited, but he doesn’t pull anymore. Progress. 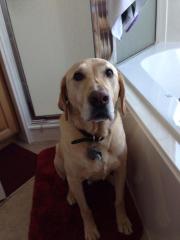 Another challenge: Food. He is SOOOO food oriented because he was trained with positive training…meaning food rewards. He worked for food, not respect. Not to please the leader, but to get a quick treat. We don’t work this way, and I don’t train this way. We compromise with him because he was used to training this way for 6 years. The 10% of training I lose is when there is food… or worse – children with food. So, we continue to work on this, but unfortunately, I believe what is done, is done.

For the most part, he is the perfect dog. And I thought that, until we took him to the K9 Lifeline’s social class so I could learn more about training in a pack environment, and using other techniques besides positive training. I’m open to learning many techniques, and I have an open mind. I won’t hurt or scare a dog, but I demand respect as soon as walk in the door. Some dogs are immediately intimidated when I walk in because they aren’t used to this. Other dogs, challenge me because they see me as a threat to their rank. Other dogs accept me right away and are thankful for the leadership. Napoleon – he accepts his rank, and realizes humans are above him in rank. Anyway, we took him to class and the head trainer said I needed to get him under control. Confused, I asked what the problem was. She pointed out he was pushy and getting in other dogs’ faces. He was running around like crazy and increasing the energy in the room, thus raising the adrenaline of all the other dogs. In a high-tension/stress environment, he could cause a fight. Whether he was involved or not, it would have been his fault. That’s when I realized I had work to do. And I wanted to be educated by someone who was that in tune to a dog’s behavior. A dog she had never met before. I was intrigued, and inspired. I had to learn more.

So, for the next 6 months, we continued to go to this class, every Saturday. I learned and so did my canine counterpart. He has shown remarkable improvement, and I had no idea how much energy he had until we started working with him. 6 months worth of work later, my dog is calmer, I’m more in tune to canine behavior, and I have realized positive dog training causes so many problems that aren’t recognized to the early trainer, or someone who is focused solely on positive training. Does it work? Yes. Is it the most effective, non-violent way to train? No.

I don’t believe in hurting a dog into submission or causing fear for them to respect you. I did realize, after practicing on my own dog, and it’s a battle of the mind.

Which leads me to my next topic. Napoleon isn’t a HUGE dog, but he’s very large for a lab. He’s a healthy 85lbs (after losing 40lbs of fat after I adopted him). Trying to control him by force or physical strength would be exhausting, and he would win every time. Just like giant breeds, you have to learn to control their mind, not their body. Napoleon doesn’t jump on people…unless the person is provoking him and he feels he is being ‘invited’ to jump. Which has happened on occasion.

Anyway, Napoleon is taking this dog training journey with me, and I practice everything I learn on him to see if it will work on an ‘ideal’ happy-go-lucky dog. Which is exactly what he is. He is my best friend, and my rock when my husband can’t be. It’s not his fault, but my dog sees into my soul like no one else. He looks at me, and sees… everything. All my hurt, pain, happiness, confusion… every emotion. He doesn’t have to fix it… he just has to be there.  And he is.

5 thoughts on “Napoleon..and his beginning”